So in November I did the NaNoWRimo - national writing month. I had an idea in mind for it but scrapped it at the last second and decided to surprise myself and go stream of conscious with it and see what story unfolds. It was truly a blast and I'm proud of the story I probed and laid out. I'm excited about the characters and general world that came about by just unleashing - not controlling. However, quite a mess of text. Many feverish sections detract and don't develop. I started to comb through and revise line by line, but it left me feeling quite bogged at the end of each session work. I'm finding sections that need further examination and sections that just don't fit. In a sense it was a successful endeavor, I accidentally created something promising and fun, however I am scrapping what I wrote and will be re-writing it completely. It's going to serve as a very in depth journal entry, laying the foundation and stirring the thoughts as I start the whole thing from scratch, again.

It was a good experience. I've written a lot of short stories, poems, scripts, and a couple "novellas" (=27,000) but this was my first crack at something 50,000 + . I'm glad I did it. It's not publishable the way it came out (who would expect it to, a novel crammed into a month...) But it forged the way to a new idea which I've spent a lot of time developing further and am now ready to embark on it again, with a much more precise vision. But I have realized that the thing I need to hold onto is the freewheeling spirit of the first stab, the loose and creative free-for-all that happened, and the connection to the subconscious. One of the most enjoyable aspects to writing I find is surprising oneself.

I will be posting some bits from the first attack at it from time to time in case anyone is interested. I'm usually fairly mum about the specifics of what I'm writing while I'm writing it. I feel that talking about what I am going to write ultimately takes the wind out of my sails and then the urgency to actually write it starts to dissipate. So until it is done, I won't be talking about what's IN it. But I'd like to talk about process and at times might find it appropriate to share sections of the first rough draft, because as I mentioned, I'm looking at the rough draft like it's a very in depth journal entry. The original stab is experimentation, not the result. Although I'd like to keep the next draft a bit of an experimentation as well, just a little more precise and concise and honed.
Posted by The Igloo Oven at 1:56 PM 2 comments: 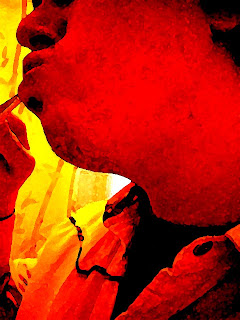 I've developed an odd habit over the past week. I've taken to zoning out in deep thought while brushing my teeth. The foam builds up and I wind up swallowing a little, and then I cough and gag. It makes me want to not brush my teeth. But I don't have dental insurance so that would be a bad idea. I must really work on focusing on the task at hand. It reminds of something an old boss said to me when I slipped up a little on a project, I forgot to test one of our back up systems, and sure enough we needed it and it didn't work. I apologized to him and said I was going to create detailed checklist for the event the following year so I don't neglect by mistake in the load of the of other things to do, a simple yet important factor. He said to me "Jeff, this should be very much part of our culture...if we have to make a list to get it done then we have bigger problems. It should be habit, like brushing our teeth in the morning, we shouldn't have to think twice about it."
Hmm...seems like I am having trouble with the tooth brushing thing as well. He also made a reference about an employee who was on the immature side about "it's like having to watch a kid so he doesn't eat the whole bag of oreos." I also have a tendency to eat a whole bag of oreos when one is laid in front of my face. I must be a f*ck up in his book.
Posted by The Igloo Oven at 10:09 AM 1 comment:

As I was coming home from an errand mid afternoon yesterday, walking up the courtyard I was stricken with an odd sense of panic. A woman was fast approaching from behind, draped in a yellow jacket, hood covering her face. Her feet clopped. The particular tonal quality of the clopped drove this panic through the roof and I hustled to the front entrance to the stairwell. She was still coming fast from behind. I fumbled with the keys, got in, and hurried up one small flight of stairs and fumbled once again to get into my unit. My stomach crunched as I feared for sure she would come up behind me. I got into the unit, slammed the bolt shut. And laughed very hard at the whole thing. I looked out my front window, into the courtyard. She wasn't there. Didn't hear her going into the front door of my end of the courtyard. She must have veered off to one of the side sections. Phew. For some reason the intensity of her speed coupled with the clop of her feet shuddered me with sudden dread. It was an odd experience. Don't think I've really felt anything like that. Am I coming down the agoraphobia? I hear it's going around.

On another note the rush of the close brush with panic carried over into good energy as I pumped out a 10 pg short story from an idea I had stewing from the other day. I'm excited about this piece. I celebrated in the evening my checking out "Antichrist" finally. Beautiful and terrifying. It's been awhile since I've seen a film on the screen so artfully shot, in cinematic language of its own. It definitely had some visceral moments which made crawl out of my skin. I'm glad I didn't bring my girlfriend, she had a hard enough time watching Agent Cooper pull a paper sliver of a letter from underneath Laura Palmer's fingernail in "Twin Peaks." I very much liked "Dogville" by Lars Von Trier too. What a guy.
Posted by The Igloo Oven at 6:34 AM No comments:

Here is a clip of me reading from Turban Tan at a Columbia College-Chicago reading event.

Posted by The Igloo Oven at 7:47 AM No comments:

I confess an intense enjoyment of ghost hunting shows. I have an enthused excitement and curiosity for the shadow people. My girlfriend and I get hooked easily into the various shows (Ghost Lab, Ghost Hunters). There are some chilly moments in the show and my imagination runs, yet there is a skeptic lurking in the back of my head and that I must address for a moment. Perhaps the show is not valid? Perhaps the paranormal evidence in the form of EVPs, etc is contrived? I would like to think not. Partly to loom in the magical ignorance. I like it. I enjoy it. But a show like that, if it were contrived, would have embarked on ballsy consequences. If the fabrication of the ghostly encounters were ever leaked, the show would most likely dissolve immediately. The credibility: shattered absolutely, if that were the case. And the show would not go on. The show, I feel, depends on its credibility. If it were to lose that credibility, haunted venues would not longer seek their services for investigations. Would a network invest the time and money if there was no credibility to rely on a full run of shows? I think not. We're not talking about an ordinary reality show, which tends to be fully contrived with drama instigated to keep the viewing exciting and keep ad revenue by glueing viewers with bitch outbursts. I mean, the potential for ghostly sightings is tension as it is...Any thoughts?
Posted by The Igloo Oven at 6:09 PM 2 comments:

I have completed a feature length screenplay adaptation of my illustrated book, Whiskey Pike. I am currently combing through it and touching up a second draft but I would love to get some outside feedback and perspectives on what works and what doesn't in the script.

If you are interested in taking a gander at it please let me know:
jeffphillips.thirdleave@gmail.com